Ciena: From automated to autonomic networks

From automated to autonomic networks 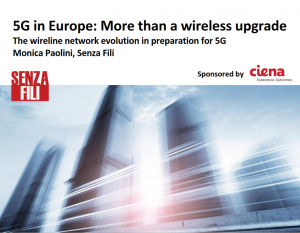 Automation in wireless networks is still surprisingly limited in both scope and depth, but operators have been trying to automate some functions over the years. This type of automation has been driven by a top-down, static approach that translates the knowledge of engineers into scripts that execute repetitive actions. As networks become more complex and powerful, though, this type of automation is no longer sufficient.

With virtualization and 5G, automation becomes more crucial to ensuring even basic operability. And automation itself changes in fundamental ways to enable wireless networks to eventually self-monitor, self-configure, self-optimize, and self-heal, with engineers overseeing and monitoring the process but not driving it.

“When it comes to NFV and SDN, bringing all the piece parts together, static policy-based automation does not help you much. You would have to look more deeply into automation techniques that rely on self-learning systems or self-driving systems,” Kaniz Mahdi, Vice President, Advanced Architectures, CTO Group, at Ciena, about the transition from static automation to new, autonomic networks.

“AI, machine learning, and data analysis have been available for a long time, but their use … in telecommunications has just recently shown some promise. On one hand, analytics and machine learning are coming to fruition, while on the other hand, a need is created by the virtualization of network functions.”

“You marry the two, and then the combination is what we call autonomics. It’s a collected control of multiple, possibly heterogeneous, discrete closed-loop systems (e.g., self-driving systems) which are governed by common business goals. You need that when you’re bringing different autonomous systems together.”